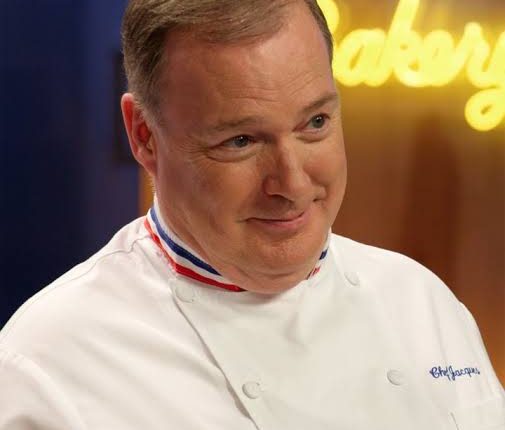 Jacques Torres, otherwise called Mr.Chocolate, is a globally recognized baker. In the United States, he is widely-accepted for his extraordinary skills in chocolate making and his several chocolate outlets.

Jacques: an Algerian by birth was born in the year 1960 to French parents, though During the Algerians’ fight for Independence, Jacques and his parent relocated To France.

Torres attended an elementary school in Southern French town where he grew up. After his primary education, he began learning Culinary when he was 15 years at a local school.

He specialized in the making of pastry and baking.

As of when he was 17 years, he already became a leading student amongst his peers. Little wonder he finished as the best student in his class.

By the time he clocked the age of 20, Jacques was made to join the military under compulsion.

He functioned in the military for some time, but he was later discharged, and as soon as he was released, Torres went back to his kitchen career and worked in a good number of local eateries until he met with Chef Jacques maximin.

After their meeting, Torres started working for chef maximin at a hotel named Negresco.

Following several activities performed by the chef, chef maximin was impressed by the unique skills and sound knowledge base of Torres.

This probably is the reason why Torres eventually spent 18 years of his life under the training of Chef maximin.

When he gained his freedom, he advanced into working as a regular chef at the same hotel.

He also went back to school in order to study art majoring in pastry where he then graduated with a degree.

Torres then taught about Pastry for close to three years that is: from the year 1983-1986. In the year 1986, He finished his short teaching career at Cannes Culinary school.

Torres attained another major height in his pastry career when he was honored with the Best Craftsman of France Title in the year 1986.

Usually, this title was given to high and notable chefs who have shown exceptionalities in their culinary skills. He got this honor at the age of 26 as the youngest Chef to earn that title.

Indian 1988 Taurus relocated from France to the US where he served at a chain of hotels called Ritz Carlton.

At first, he was assigned to Los Angeles but later he was moved to another branch of the hotel in Atlanta.

In Atlanta Torres worked in the corporate section of Ritz Carlton hotel as the head chef in charge of pastry.

About a year later, he met another notable personality whose name is Sirio Maccioni. Torres and Sirio, however, created a good relationship and Sirio decided to employ him to serve at an eatery in New York.

The restaurant: Le Cirque back then was a top leading eatery well known for its specialty in French cuisine and greatly patronized by the notable and mighty personalities of New York. Torres served in this French eatery for more than 10 years.

In the year 2000, Torres stopped working for Le Cirque. He decided to start up his own Chocolate making Outlet in Brooklyn part of New York.
Presently, he has numerous trading shops and a shop which makes Ice cream.

In the year 2007, Torres got married to Hasty Khoei who was his student and colleague in chocolate making. Their union is blessed with one child.

Torres’ wife Hasty also has her own chocolate outlet in Los Angeles.
Hasty’s outlet which is specifically located in Beverly Hills is often referred to as madam Chocolat.

Following the footsteps of her husband, Hasty makes confectionaries that are handcrafted in order to target her desired clients.

He was raised without a proper formal education being a son of a carpenter, Torres sought after passion and today he is the American dream reality.

His name Jacques Torres is synonymous with pastry and chocolate across the districts of New York City.

Mr. Chocolate is today an illustration of how passion and hard work can be harnessed to achieve an ultimate lifelong goal.

Isn’t it so surprising to know that Jacques Torres didn’t have any serious formal education while growing up? Though his father was just an average carpenter, this did not hinder Torres from getting to the great height he desired for himself in life.

Now he is a famous personality in America especially when it comes to Chocolate business. Currently, In New York, the name Jacques Torres is as popular as it’s Chocolate.

Truly one can conclude that Jacques Torres’s life is evidence that one’s background in life does not solely determine the extent to which one can succeed, rather, passion, hard work, persistence, willingness to learn and excellence are keys to success in life.

In the year 2004, Torres opened his Chocolate making Factory, He also started a second retail spot in Manhattan.

On the 13th day of May 2010, Torres alongside few other chefs from International Culinary Center, formerly known as French Culinary Institute served a dinner worth $30,000 for President Barack Obama’s  Democratic Congressional Campaign Committee for the fundraising event held at St. Regis hotel in Manhattan.

The Algerian American Chef has an estimated net worth of $4 million.

How to write a book in 7 days

What is UNILAG and LASU Cut-off Mark?

Who is the Owner of Marvel Entertainment?

How to Apply for UBA Africard 2021

Prices of Toyota cars in Nigeria in June 2021

How to Mix your Song Tracks yourself on Phone