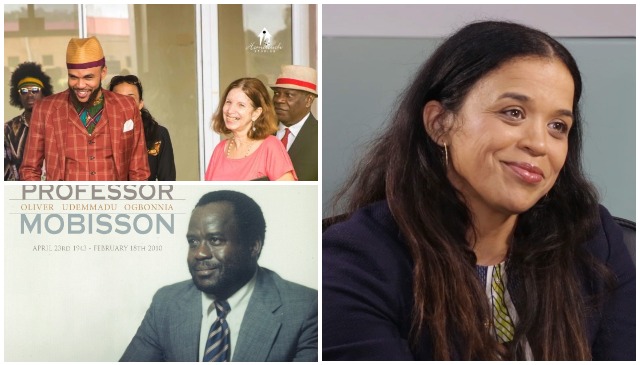 The song ‘classic man’ was and is a banger, no one can deny juice of its charm because it stays ever fresh, the same can be said of the song classic man.

The music has been on airwaves for years and still, anytime it plays, it still gets hands in the air and the man who made this magic happen is known as Jidenna, an American rapper, singer, songwriter and record producer.

Jidenna’s real names are Jidenna Theodore Mobisson, he hails from Imo state, Nigeria and he only spent some of his years in Nigeria before his family moved back to the United States with him when he was six.

Jidenna was born in Winsconsin to Tama Mobisson (mother) a white accountant and his father Oliver Udemmadu Ogbonna Mobisson on May 4, 1985, Jidenna is 34 years old in 2019, come may he will be 35 years old.

Jidenna spent some time in Nigeria where his father was working as a professor in computer science in Enugu State university- Are you shocked? Yes, the son of a Professor of computer science is a musician and not just any type, he is the classic man.

His family moved from Nigeria back to the United states of America, Norwood Massachusetts in 1995.

Jidenna’s father is Oliver Udemmadu Ogbonna Mobisson, a Nigerian scientist, Professor, Activist and Entrepreneur. He is a founding professor of Anambra state university of technology ( Now known as the Enugu state university of science and Technology).

He was actually born in Port Harcourt, Rivers State, Nigeria. He attended St. Matthews Primary school in Imo state and he went ahead to attend Christ the King College in Onitsha.

Nobody can deny his excellence in academics and that was what caught the attention of the US peace corp volunteers who advised him to study in a US or UK university.

He died in 2010 as a result of a heart attack but before then he had suffered a massive stroke.

Tama Mobisson is a white woman who was an accountant that married the Nigerian Udemmadu Ogbonna Mobisson, who is the father of the music artiste we have all grown to love and accept as Jidenna.

We all know that Jidenna is a classic man and not the richest man. I am sure many are obsessed with the information as regards his net worth but let’s be realistic, does it really matter? His swag, good looks, and patriotism is something to live for.

Of all the music acts that have made it big in the United States, I feel the only one who has been loyal to his roots has been Jidenna as he is never afraid to identify with his Nigerian roots and he comes to Nigeria quite often. Does it really matter if Jidenna is worth just one million dollars? I don’t think so!

Yes, Jidenna’s net worth is $1million in 2020 and this can be attributed to the fact that he is an international act and they don’t lie about figures. Jidenna may not be your regular rich Nigerian musician with audio money but we all know he is a man of class.

Best country to migrate to from Nigeria

How to Strike a Good Deal on eBay

5 Most Technologically Advanced Countries in the world

Regina Lasko Biography and Net Worth

How to register an NGO in Nigeria

How to Start An Event Decoration Business in Nigeria

20 Souvenir ideas to gift your wedding guests in Nigeria